Ledge stone features a rectangular shape which follows a linear appearance with shallower, less variable height. Both the seam and split faces can be seen, with the split face dominating the stone blend. Mosaic stone is an Irregular shaped quarry material exhibiting the seam face and/or the natural face of the stone. No shape is the same size or cut, making each stone truly unique. These natural seam faced pieces are guillotined and formed into rough squares and rectangles. 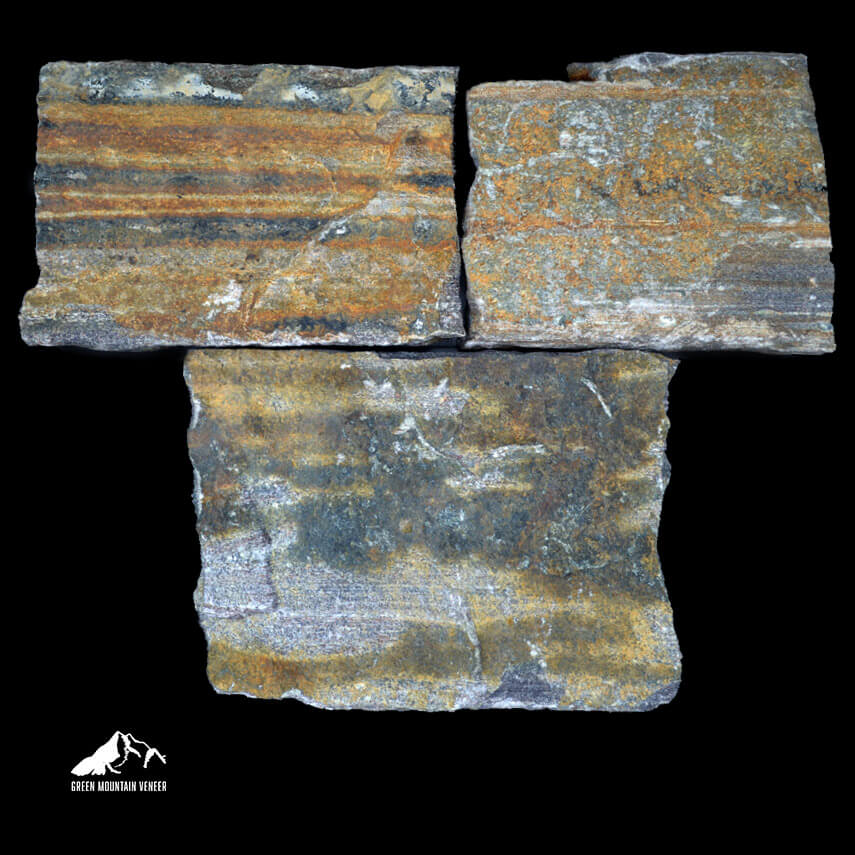 This stone provides a linear look with its long, fairly rectangular shapes. Ashlar/strip exhibits the face of the stone, revealing striations that can be very colorful.

A covering or a coating on a structure often applied to increase thermal energy efficiency and/or improve aesthetics.

(Also referred to as manufactured stone) concrete poured into a mold then colored to look like real stone.

(Also referred to as dry-laid) a technique used in the construction of stone walls in which no mortar is used to hold the stones together. This is generally used for retaining walls with the stones stacked in an interlocking manner and slight backward incline.

The portion of the stone that is exposed.

An individual piece of stone separated from ledge by nature and used in its natural form.

The pattern produced by the arrangement of particulate constituents. The particles of a rock.

The mortar used to fill the crevices between the stones.

A flat stone used for the area in front of a fireplace or underneath a stove.

The space between the pieces of stone, often times filled with grout.

A hard sedimentary rock, composed mainly of calcium carbonate or dolomite, used as building material and in the making of cement.

Starts as one type of rock and – with pressure, heat, and time – gradually change into a new type of rock.

A stone whose essential constituents are mica and quartz, and whose schistosity is mainly due to the parallel arrangement of mica flakes.

When stones are cleaved or separated along a natural seam to reveal its natural characteristics. It will contain subtle variations and fluctuations in face reveal and color appearance.

Products quarried from the earth, used over many thousands of years as building materials and decorative enhancements

A method of storing and transporting stone in which the stone is stacked on a wooden pallet.

Refers to the finishing of the joints with mortar or caulking. Some finished joint styles include concave, V-shaped, raked, flush, beaded, etc.

A site from which usable stone is extracted from the ground.

A hard white or colorless mineral consisting of silicon dioxide, found widely in igneous, metamorphic, and sedimentary rocks. It is often colored by impurities.

A sandstone made mostly of quartz grains

The right angle face and edge of a corner piece of stone.

The height measurement of a piece of stone veneer.

A sedimentary rock consisting of mostly sand-size grains of quartz, or feldspar. Sandstone forms in many colors due to impurities within the minerals.

A smooth edge of stone that has been cut with a saw blade, as in the back edge of sawn back thin veneer.

A coarse-grained metamorphic rock which consists of layers of different minerals and can be split into thin irregular plates.

Rock that has formed from sediment deposited by water or air.

Division of rock by cleavage usually along planes of relative weakness.

When stone is split against the grain showing its natural texture and stratification.

A commonly accepted variation in dimension.

A handheld tool with a flat, pointed blade used to apply and spread mortar.

Layers or sheets of minerals that have crystallized inside the rock resulting in elongated, curvy and sometimes zigzagging lines that dance across and cut through natural stone.

A thin protective or ornamental facing applied over another surface which is not meant to be load bearing.

The process of natural modification on the exposed surface of a stone caused by temperature changes, plants, animals, acid, salts, water, etc.

Our expert staff is here to help answer any questions you have about your next stone project.

Our expert staff is here to help answer any questions you have about your next stone project.